I live in Iloilo City, and I want to share some facts about it and show you what to expect when you visit.
Iloilo city, is dubbed as “The heart of the Philippines” , and the Ilonggos, distinguished for the warm and romantic song-like melody of their spoken language, Hiligaynon. Smiling faces, festivals filled with laughter and songs, scenic settings. Iloilo fits the picture. There will definitely never be a dull moment in Iloilo.
The City of Iloilo is a highly urbanized city on Panay Island in the Philippines. Iloilo City is 337.6 nautical miles from Manila. The city has a total land area of 70.3 square kilometres (27.1 sq mi)
Location Map of Iloilo

How to get here
To get to Iloilo, one can travel from other parts of the country in style through NAIA Airport in Manila as its premier gateway. By air, it is served by 10 jet flights daily from Manila that takes about an hour. Cebu is only 35 minutes by plane and 2 hours from Davao and Cotabato. The New Iloilo Airport located in Cabatuan, Iloilo is built in a wider and panoramic place with state-of-the-art computerized facilities.

A relatively short trip, and you are magically transported to a totally different environment, an extraordinary destination of remarkable sights. Laze the days away on its dazzling beaches of dreamy blue shores, watch the world go by in friendly rural villages, try your hand at thrilling adventure travel and sport to terrific shopping. This unique combination is a clear guarantee of an unforgettable journey.
Cost of Living

For shopping malls, we have SM City, Robinson’s and Gaisano City, and a few other local ones.  If you're a coffee drinker, don’t you worry ,Starbucks  and Coffee Break will take care of your cravings.
If you don’t want to skip on your exercise we also have air conditioned gyms and clean swimming pools all over the city.
There lots of nice restaurant with good sea foods along the beach or within the city and healthy sumptuous dining is not difficult to find within Iloilo City, being an area with fishing and farming being two of the major sources of livelihood. But you should also try some unhealthy mouth watering crispy lechon ( roasted pig)here !
Real estate prices in the top subdivisions are about half of what they are Manila, , it ranges from Php 2500 to 5000  per sq.m . , depending on the location.

Basically, the rest of the food and basic necessities are close to that the prices in Manila
Safety
There’s not much foreign tourists as in Boracay, Cebu, Davao on Manila. The foreigner is more of a “curiosity than an opportunity” to quote a friend and is treated with respect.
I can say firsthand that it’s safe for foreigners to ride jeepneys or walk the streets downtown. Pick pocketers are more of an exception than the rule. There is a community of resident expats here and they hold meetings twice a month.

Generally, people are friendly and humble and  can speak English so communication is not a problem.
Public transport
Just like Manila, Iloilo City’s main main mode of transportation is public utility jeepneys and metered taxis but there are areas served by tricycles( motorized)  or “trisikads”( pedalled)  only. And unlike Manila, traffic is not that congested, but the roads are quite narrower/smaller.

Though we have a new International Airport, it is mostly limited to flights to Hongkong and Singapore only. Most International flights has to stop in Manila still.
How is Iloilo compared to Manila? Despite its being progressive and versatile, Iloilo province continues to reinvent itself, with special emphasis to the preservation of natural resources. Iloilo has protected areas that, at the same time offer good trekking activity in the region. It has heritage areas, wildlife sanctuaries. Its mesmerizing landscape of waterfalls, caves and rolling hills are typical sites outside the city. Thus it has less pollution and it's cleaner. It is smaller in area and population.
Festivals
Dinagyang Festival (every 4th weekend of January)
The Dinagyang is a religious and cultural festival in Iloilo City, Philippines held on the fourth weekend of January, is the city's largest festival and is held to honor the Santo Niño, and to celebrate the arrival on Panay of Malay settlers and the subsequent selling of the island to them by the Atis. The highlight of this week-long revelry is the street dance competition. 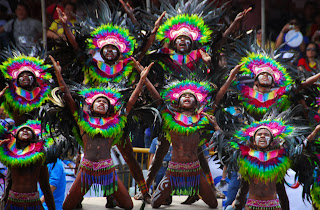 The Paraw Regatta is a race among seafarers on colorful sailboats called Paraws (claimed as the oldest traditional seacraft in Asia) in the Iloilo Strait between Guimaras Island and the city of Iloilo. The present-day Paraw managed to maintain its original design from the sailboats of the first settlers from Borneo who were in search of a peaceful home in 1212 A.D. Surviving centuries, the paraws have become a vital part of the Filipino seafaring life. The first race started in 1973 with the mission to preserve the historic value of the paraws. It is held every 3rd weekend of February at Villa Arevalo District in Iloilo City. Today, the event has grown from being a boat race to a festival with various interesting and exotic activities. 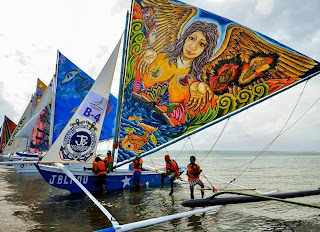 There are two sides, if you prefer to enjoy and relax in the calm waters, stay on this side.  Called “Tangke” by locals ,this is a salt water lagoon , The water coming from the sea through the small openings in the limestone formation under the sea. 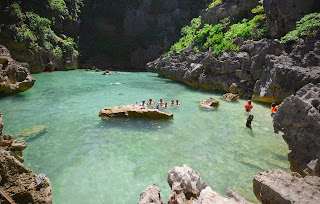 This on the other hand is a disappearing  sandbar. You see it as a fantastic stretch of white  sand at low tide but  during high tide only a portion remains. 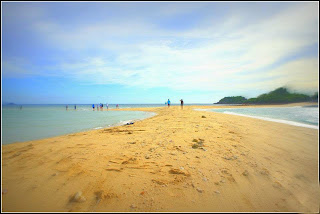 One sunny morning, one can visit 5- 7 nearby islands in a small motor boat. 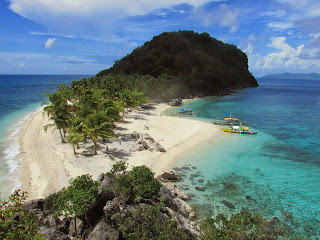 Posted by BrightEyes at 5:53 AM

BrightEyes
Instrument of God for Physical and Spiritual Vision...bringing bright eyes to all Filipinos.